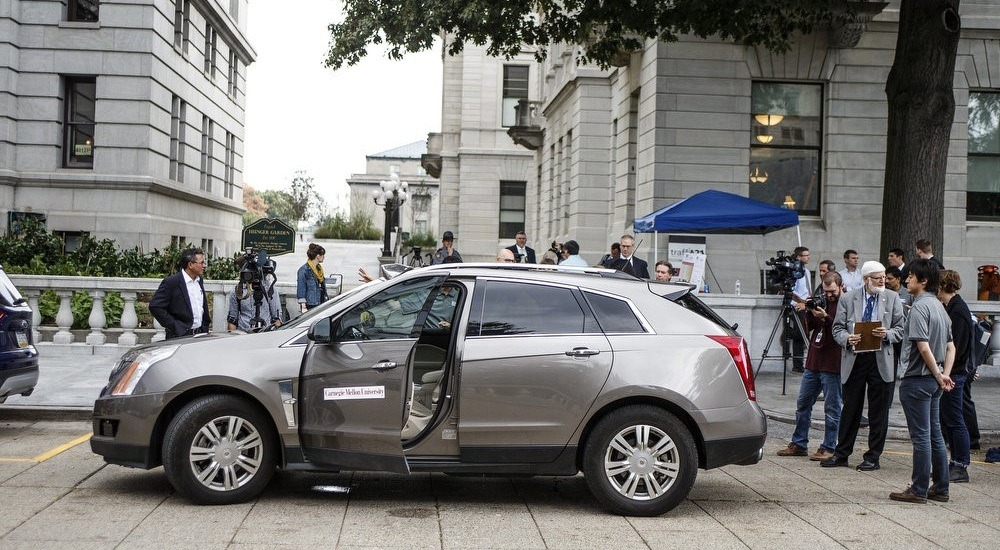 How Michael Baker is helping to lead the way with new technology to make our roads, bridges and drivers safer and to make traffic flow better

From the Fall 2017 issue of Signature

All around us, transportation and the infrastructure to support it are changing rapidly. Consider the following:

Behind the scenes, Michael Baker International has emerged quietly as an engineering leader in this field with an expanding, ever-more-important role going forward.

Says Matt Smith, associate vice president and manager of the firm’s Connected and Automated Vehicles program: “Michael Baker has a strong history in developing, designing, constructing and operating traffic signals. Our core competency puts us right at the forefront of intelligent transportation, and it has given us opportunities to take the next step.”

Smith notes that Michael Baker, through its work with the design and implementation of traffic signals and other transportation technology solutions since 1960, was well positioned to transition into the new world of intelligent transportation.

“In a nutshell,” he says, “intelligent transportation is using technology to reduce traffic crashes and their severity, better manage traffic along roadways, help motorists and users of transportation systems and increase capacity for roadways by improving traffic flow.”

The next step for Michael Baker involves the use of sophisticated computer and robotics technologies to create connected cars – those that enable communication with infrastructure, devices, networks and services outside the vehicle – and automated vehicles.

Greg Cerminara, transportation practice executive in Michael Baker’s Pittsburgh office, observes that this latest phase of Intelligent Transportation Systems (ITS) is still in its infancy.

“Intelligent transportation has had traffic engineering as its core but has evolved to include computer science, electrical engineering and software engineering,” he says. “We have to work all of this together to accommodate the industry’s needs and to address issues.”

Michael Baker is positioned well, Cerminara says, as a leader in this system phase, collaborating with top institutions and manufacturers, as well as progressive government agencies, to shape smart transportation of the future. In Pennsylvania, for example, Michael Baker serves as an adviser to state government, supporting the Automated Vehicles Testing Policy Task Force, a public-private partnership.

“They’re looking at what needs to happen legislatively to encourage development of this technology for deployment on public roadways,” Cerminara says of this active task force.

Although the technology still may be in its nascent stages, Michael Baker already has partnered to provide planning, policy or deployment service son some significant connected-vehicle projects and initiatives.

A TEST BED FOR HARRISBURG, PA.

In Pennsylvania’s capital city, Harrisburg, Michael Baker worked with the Pennsylvania Department of Transportation (PennDOT) in a pilot program in which Carnegie Mellon University’s automated Cadillac SRX received information from the infrastructure, namely traffic signals. This is one of the first connected/automated vehicle test beds in the nation. The test bed spans either intersections and broadcasts information about each signal’s phase and timing information via dedicated short-range communications, also known as DSRC.

Michael Baker designed, configured and installed the infrastructure for the test bed.

Inspection of bridges clearly is an important function, yet it also is inherently dangerous for inspectors forced to dangle hundreds of feet in the air to do their job. But what if that job could be performed by aerial robots using sophisticated technology to relay images of bridge components to inspectors safely on the ground?

The goal is to develop a tabletop-sized, unmanned aerial vehicle (UAV) that will deploy photography, video and laser-scanning technology to create high-resolution 3D models of the bridge for analysis by inspectors.

When public agencies make decisions about traffic operations and highway improvement investments, they often rely on data analytics of “Big Data” – information gathered on speed, variability and reliability, travel times, and average and total vehicular delay of the existing highway system. These measures may seem obscure, but they help transportation planners determine investments into highways and traffic operations in the best interests of motorists and communities, according to Pittsburgh-based Jim Katsafanas, national sub-practice leader for traffic and ITS for Michael Baker.

“Big Data helps government agencies understand how highway systems are performing and identify trends and problem areas, so they know where they want to invest their dollars,” Katsafanas says.

A Michael Baker team, he says, is collaborating with the Southwestern Pennsylvania Commission (SPC), which is the metropolitan planning organization for a 10-county area, on just such a project. Michael Baker’s software engineers and traffic engineers are teaming to gather pertinent travel and performance data on the region’s highways, which then will be compiled for PennDOT by the University of Maryland and write software programs for SPC that automatically analyze and process the information and convert it to easy-to-follow summaries. Katsafanas says it’s a vital process for SPC, as the agency oversees state and federal funding for all of the region’s roads, including interstate and interstate-like highways.

Traditionally, gathering, coordinating and reporting the Big Data has been a manual process that takes SPC weeks. That’s about to change, thanks largely to Michael Baker.

“We’re building a software platform that basically does all that work for them,” Katsafanas says.

Perhaps one of Michael Baker’s most ambitious initiatives is a joint project of transportation agencies in Michigan, Ohio and Pennsylvania called the “Smart Belt Coalition.” The group brings together leaders in the field to support research, testing, policy, funding and deployment that could lead to shared, consistent policies and programs across state lines.

“Each of these states is doing work independently, which is great, but how much better it is to combine efforts, thereby improving effectiveness and attracting investment,” Smith says. “It’s a cool concept.”

Initially, the coalition intends to focus on technology applications in work zones, incident management and an innovative concept called “platooning,” where moving vehicles are linked by automated functions.

Mark Kopko, manager, traveler information and advanced vehicle technology for PennDOT, indicates the collaboration could provide several important benefits for all participants, including improved communications among the three states.

Says Kopko: “This system would allow agencies to improve situational awareness of active and planned construction activities (including maintenance and utility work) and allow the three states to share their data with third-party companies in a single, unified data feed.”

In Phoenix, Ariz., confused or impaired drivers along Interstate 17 had become a serious menace to other motorists over time as many of them would enter exit ramps and drive the wrong way on major highways there. That problem had become so severe that the Arizona Department of Transportation (ADOT) undertook a study of wrong-way driving on I-17 from 2004-2014.

“Our study showed that, in an 11-year period, the metro Phoenix portion of I-17 had the highest rates of overall confirmed wrong-way crashes and fatal wrong-way crashes per mile among urban divided highways in the state,” Jim Windsor, deputy state engineer with ADOT’s Transportation Systems Management and Operations Division, reports.

To address that hazard, ADOT now is implementing an innovative wrong-way detection system along a 15-mile stretch of I-17, and Michael Baker is playing a key role.

The scope of the project may prove unprecedented. While such systems usually offer “spot” detection at a single interchange, the ADOT approach is much more comprehensive, according to Don Tappendorf, ITS department manager and technical lead in Michael Baker’s Phoenix office.

“This is an integrated system that covers 15 interchanges,” he says. “It may be the first of its kind in the nation. Clearly, we’re breaking new ground.

A Michael Baker team designed the system, which uses thermal cameras for detection.

Says Tappendorf: “Right now, the only way authorities know there’s a wrong-way driver is from 9-1-1 calls.”

From the outset, he explains, ADOT viewed the project as fast-track.

Michael Baker met the compressed schedule, and the system is scheduled to debut by the end of 2017.

“It was a complicated process,” Tappendorf says, “with project parameters changing nearly every day, if not multiple times per day. The governor’s directive to deploy the system as soon as possible added an additional sense of urgency. So we sprinted even faster than we were sprinting, with a true team among ADOT and Michael Baker staff.” 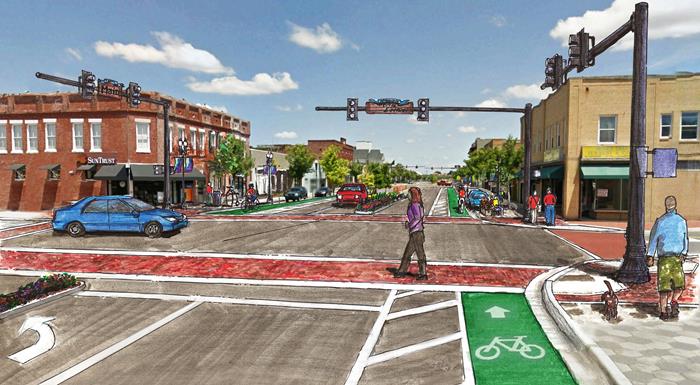 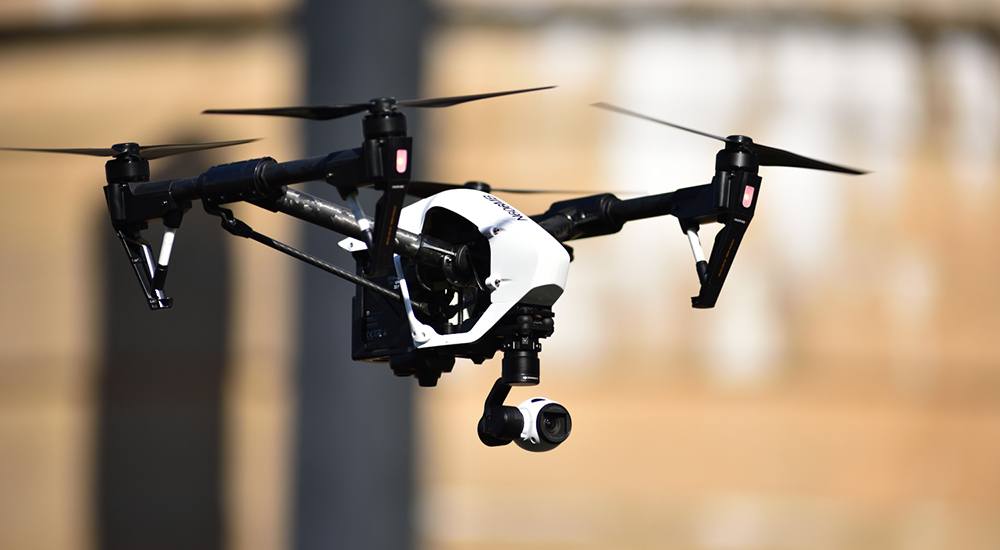 Visit our Newsroom for more details